Roger Dale Swords, 66 of Portsmouth, Ohio passed away September 13, 2019. He was born January 5, 1953 to James Berlin and Kathryn Elizabeth (Lewis) Swords. Roger was a retired box maker from Mills Pride in Waverly. He attended West High School and passionate about sports. He played softball in a local league and was also a bingo enthusiast. He came to know our Lord and Savior in 2018.

He is proceeded in death by his parents and a young daughter, Katheryn Juanita Swords.

He is survived by his wife of 43 year Kathy (Hobbs) Swords. They were making plans to celebrate their forty-fourth wedding anniversary the beginning of October. Also surviving is a son, Tony Swords (Valerie) of Portsmouth, 2 daughters; Stephanie Swords of Cleveland and Christine (Christopher) Ramey of South Shore, Ky. His grandchildren held a special place in his heart, surviving are Anthony Swords Jr., of Portsmouth, Jasmine Swords of Portsmouth, Kimberly Ann Fletcher of Greenup, and April Arlene Fletcher of Greenup. He is also survived by a brother Berlin Swords (Mary) of West Portsmouth, and a sister Christine Stamper and several loving and caring nieces and nephews.

Roger’s remains will be cremated as Roger requested. A Remembrance Service will be held at the Hudson House Community Room, 610 5th Street, Portsmouth, Ohio on Friday, September 20, from 12-3 p.m. Arrangements are under the direction of the Roger W. Davis Funeral Home in West Portsmouth. Condolences may be sent to www.rogerwdavisfuneralhome.com 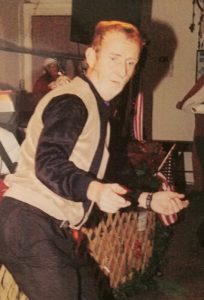