Paul Thomas Barker, 97, of Waverly, Ohio passed away on Tuesday, August 27, 2019 at The Pavilion Nursing Center of Piketon, Ohio.  He was born August 29, 1921 in Portsmouth, Ohio, son of the late Thomas Franklin and Nancy (Scaggs) Barker.  On January 18, 1941 he was united in marriage to Virginia Herdman Barker who preceded him in death on May 16, 2007.  Paul is survived by a son, Bruce Wayne Barker and his wife Paula of Waverly, Ohio; three grandchildren, Craig Barker and wife Lori of Waverly, Carma New and husband Darrell of Piketon and Dr. Daren Barker and wife Monica of Tennessee; three great grandchildren, Austin New USAF, Brooklyn New and Colton Barker; two step grandchildren Tyler Wagoner and Derrick Wagoner; a sister, Ruth Ann Barker Turner and husband Nick of Bogota, Texas and many nephews and nieces.  In addition to his parents and wife, Paul was preceded in death by a brother Ishmael Barker.

Paul was a World War II veteran serving in the U.S. Army.  He also served as the Pike County Auditor and retired with over 25 years of service. He was President of the Western Local School Board and Superintendent of Pike County Ohio Department of Highways. He was also a member of Morgantown C.C.C.U., the Masonic Lodge Orient #321, the Board of Elections, and he was a lifelong democrat.

Family will receive friends at the funeral home on Saturday from 4-8 p.m. and one hour prior to the service on Sunday. 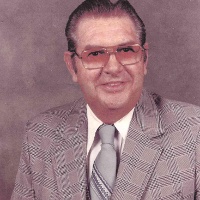