Age 81, of Portsmouth, passed away Thursday, September 19, 2019 at SOMC Hospice.  She was born December 30, 1937 in Portsmouth to the late John and Thelma (Allen) Muck.  Fern was a 1956 graduate of Minford High School. She was of the Seventh Day Adventist Faith and was faithful to church when she was able.  She enjoyed crocheting and doing cross stitching, she also loved reading and collecting books. She had lots of books, some of them with the wrapping still on them. She also loved to grow flowers, although it was hard to get anything to grow in the soil around her house.

Funeral services will be 10:00 a.m. Monday, September 23, 2019 at WOLFE-NELSON FUNERAL HOME in Sciotoville with Pastor Ralph Shaffer officiating.  Interment will follow at Memorial Burial Park in Wheelersburg.  Friends may call from 9:00 a.m. – 10 a.m. at the funeral home prior to the service.  Fond memories of Fern and expressions of condolence may be shared at www.WolfeNelsonFuneralHome.com. 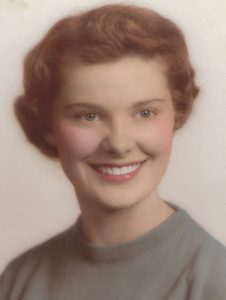