“Twilight is upon me, and soon night must fall. That is the way of things.”

SSG Brandon Charles Franzen, 34, of West Lafayette IN, returned to the source to be with his Lord at 1600 hours on 17 July 2019 at the Ohio State University Wexner Medical Center. His passing followed a long battle with illness. His last breath was taken surrounded by loved ones.

Brandon was born 29 March 1985 in Xenia, Ohio. He graduated from Western High School in Latham, Ohio in 2003. He developed an interest in paleontology, that followed him all his life. One of his passions included collecting fossils of various species, even finding mammoth bones. He was also an avid gamer, and conquered every game for every game system that he could. Several Nintendo tattoos joined the many others decorating his person. He was proud of his ink, and planned on many other tattoos in the future.

“Believe nothing you hear, and only half of what you see.”

Brandon was fond of discussing conspiracy theories, at times for hours on the phone. He doubted much, though certainly not things such as the existence of Bigfoot and UFOs. His mind was open to things that others considered to be farfetched, and he was most certainly unapologetic for his beliefs.

“Do or do not. There is no trying”

Brandon served nearly 12 years with the United States Army, with a successful career in military intelligence and as a recruiter. He spent years being deployed overseas including tours in Iraq and Afghanistan. He received numerous commendations for his service and dedication. Friends and family will attest to his enduring bravery in all situations.

Brandon was also a skilled artist and musician, who also has interest in mountain biking, and riding four wheelers and miniature motorbikes, often with his best friend Shane (Spiderman) Keaton, who accompanied him on many mischievous occasions. He was a stubborn, one-of-a-kind soul, who would fiercely defend his family and friends should the situation call for it. He was often a guiding voice: he would sugarcoat nothing, and tell you exactly what he thought of any course of action you were considering. His absence will be felt deeply by those who knew and loved him.

A viewing  will be held Sunday,  21 July 2019, from 1600 to 1800 hours at the Botkin Hornback Funeral Home at 314 E. North Street in Waverly,  Ohio. Military salute will follow immediately provided by American Legion Post # 142 and a small reception for family will be held after funeral services. 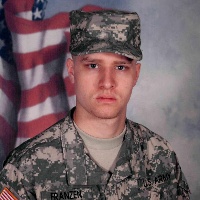