Cecil F. Cameron, Age 86, of South Webster, went to be with the Lord on Saturday, July 20, 2019 at SOMC Hospice in Portsmouth.  He was born March 14, 1933 in Greenup, KY to Hurston and Sylvia Irene (Miller) Cameron.  Glay was a 1951 graduate of South Webster High School where he was captain of the South Webster Basketball team and President of the Senior Class.  Following high school, he worked for a short time for the Williams Shoe Factory.  He then spent 40 years working as a crane operator for GM in Mansfield.  He was married to his first wife, Hallie, until her death in early 2002 and married again in late 2002 to Clorene (Weaver) Cameron.  Glay enjoyed woodworking, golf, fishing, and was an avid sports fan.  He was a long time member of Frederick Free Will Baptist Church.

Funeral services will be 11:00 Wednesday, July 24, 2019 at D.W. SWICK-NELSON FUNERAL HOME in South Webster with Pastor Rusty Larter officiating.  Interment will follow at South Webster Cemetery.  Friends may call on Tuesday from 5 – 7 p.m. and one hour prior to the service on Wednesday.  Fond memories of Glay and expressions of condolences may be shared at www.DWSwickNelsonFuneralHome.com. 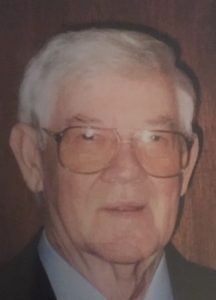