Naomi Arelia Bryant Falls, 101, of Sciotoville, went to be with Jesus, her Savior, on Friday, June 14, 2019, at the Hospice House of Southern Ohio Medical Center.  She was born on February 27, 1918, in Sciotoville, a daughter of the late Sidney and Vernie Bryant.  Naomi was a 1936 graduate of Portsmouth East High School.  She was a former telephone operator, and full-time housewife and stay-at-home mother.

Naomi was a member of Christ United Methodist Church, where she began attending as an infant.  She was a daily reader of God’s Word until her eyesight left her.

Also preceding her in death were her husband, James William Falls; brothers, Orville and Thorne Bryant, and sisters, Coral and Amber Bryant.

A Celebration of Naomi’s Life will be 1:00 p.m. on Saturday, June 15th, at the BRANT FUNERAL HOME IN SCIOTOVILLE with Steve Falls officiating.  Interment will be in Memorial Burial Park. 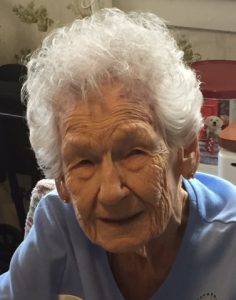