Vernice “Necie” Smith of South Shore, Kentucky passed away June 6, 2019 in Southern Ohio Medical Center in Portsmouth, Ohio. She was born in McDowell, Kentucky, a daughter of the late Corbert Lee Howell and Vangie M. Osborne Howell. Necie was a member of the Sunshine United Methodist Church in South Shore, Kentucky, she was a retired Beautician and former owner of the South Shore, Florist, a Worthy Matron of the Eastern Star, loved boating, fishing, walking her dog and doing Yoga with her friends, but above all she loved her family.

Funeral Services will be held 12 Noon, Monday, June 10, 2019 at the Sunshine United Methodist Church with Rev. Bob Sweeney and Rev. Charles Mowery, officiating. Burial will follow in Siloam Cemetery, South Shore, Kentucky. Friends may call at the Roberson Funeral Home on Sunday, June 9, 2019 from 6 till 8 p.m. and from 11 a.m. till the funeral hour on Monday.

Donations can be made to Sunshine United Methodist Church Building fund in memory of Necie. 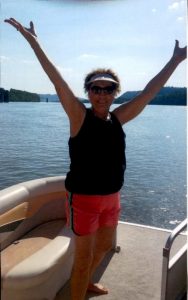