Richard Harold Walls, 88, of Waverly, Ohio went home to be with the Lord on Saturday, May 25, 2019.  He was born May 5, 1931 in Morgantown, Ohio, son of the late Neal and Ina Parker Walls.  On August 19, 1962, Richard was united in marriage to Betty Days Walls who survives.  Also surviving are a son, Jason R. Walls and wife Erin of Waverly; two daugthers, Shelley A. Parker and husband Rob of Boca Raton, Florida and Lori L. Wessel and husband Jerry of Waverly; grandchildren, Holly, Jamie, Matthew, Courtney, Logan, Tyler (Carolyn), Paige, Oaklie, Rilee, Zadie and Kordi; great grandchildren, Haylee, Owen and Liam; brother-in-law, Carl Days and wife Rose Marie; sister-in-law, Norma Walls and several nieces and nephews.  In addition to his parents, Richard was preceded in death his first wife, Patricia Whaley Walls, a brother Elmer “Perk” Walls and a sister, Catherine “Pug” Herman.

Richard was proud to have served in the U.S. Army from 1951-1953.  He retired from Martin Marietta on May 30, 1994 after 40 plus years of service, a 1949 graduate of Latham High School and a 50 year member of Western Local School Board, having served as Vice-President and President.  He was a Pike County Democrat Committeeman and on the Democrat Central and Executive Committee and the Board of Elections.  Richard was a member of Waverly First Baptist Church.  He loved the Lord, his family and his country.  He enjoyed farming and raising cattle.  Richard believed in treating everyone fairly and helping others.

Funeral services will be 1:00 p.m. Thursday, May 30, 2019 at the Botkin Hornback Funeral Home in Waverly with Pastor Josh Remy and Val Francis officiating.  Burial will follow in Gardner Cemetery, where military honors will be conducted by American Legion Post #142 of Waverly.  Family will receive friends on Wednesday from 4:00 p.m. – 8:00 p.m. at the funeral home, and one hour prior to the service on Thursday. 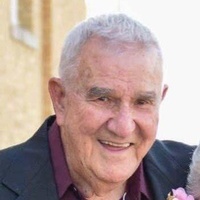