Sadly, Richard “Robo Webb” II made his last wildly inappropriate comment or text to you. Commonly seen wearing one of his many black Harley-Davidson shirts with his Mr. T starter kit, a shit-eating grin and mischievous look in his eyes-Richard was always along for the ride. He was the friend who always said yes to a concert, an adventure or a trip to the Ribber and had a famous chuckle mimicked by all. The man who never missed a family event, or one of his niece or nephew’s games. Feel free to tell us your story of standing with Richard in his normal spot on the fence at the Wheelersburg football games cheering on Baylen while letting everyone know his 1989 Trojans would have spanked that team. Richard always made time to call and visit his mom and act as the protective older brother to Terra and Shane. He also loved his girlfriend, Bridget McGlone, her two sons, Colton and Hunter, and his boxer, Judge.

His enjoyment of life is and always will be contagious to everyone who met him. Though he is missed, he went out the way he would have wanted-on the highway to heaven on a Harley. #RIDEON

He is survived by his mother, Christine Kimbler Pennywitt and her significant other, Larry Edwards, both of Portsmouth; his brother, Shane (Michelle) Pennywitt of Portsmouth; sister, Terra (Michael) Pennywitt Murray of Wheelersburg; niece, Madyson Murray of Dallas, TX; nephew, Baylen Haywood of Wheelersburg; his dad, Richard Webb of Franklin Furnace; brothers, Aaron and Jason Webb; sister, Rachel Parks of South Point; several aunts and uncles who had a hand in raising him; several cousins; his riding buddies and his friends and co-workers at Norfolk Southern where he worked as a carman.

He was preceded in death by his stepfather, David Pennywitt.

A Celebration of Richard’s Life will be held at 11 a.m. Friday at the Ralph F. Scott Funeral Home in Portsmouth with Rev. Steve Harvey officiating and interment in Memorial Burial Park.

The family will receive friends at the funeral home Thursday from 4 to 8 p.m. and Friday from 10 to 11 a.m. 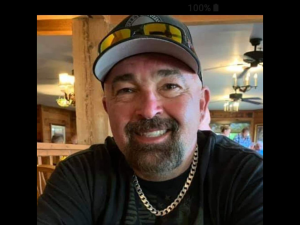