Richard Earl Mershon, 78, of New Boston, passed away Wednesday, May 15, 2019 in the SOMC Emergency Room. He was born November 20, 1940 in New Boston, a son of the late Harvey Gardner and Willadean Henrietta Phillips Mershon.

Rich retired as chief of the New Boston Fire Department after 33 years of service with the village. He was a Vietnam era Army veteran and a member of the James Dickey Post #23 American Legion. A Kentucky Colonel, he was also a member of the International Association of Fire Fighters, the SOMC Life Center and the Ashland Area Woodcarvers Association. Richard was a Glenwood High School 1958 graduate.

His wife, Nancy Jo Vallandingham Mershon, preceded him in death June 10, 2007. The couple was married November 9, 1974 in Greenup, KY.

A Memorial Service will be held at noon Tuesday at the Ralph F. Scott Funeral Home in Portsmouth with Minister Al Oliver officiating. The James Dickey Post Honor Detail will conduct Military Rites.

The family will receive friends Tuesday from 10 A.M. until the service hour at the funeral home.

The Fire & Rescue flag will fly at the funeral home on Tuesday in honor of Richard’s service to our community. 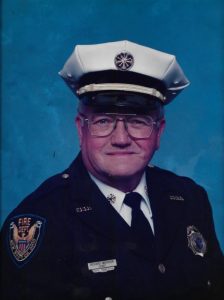