Anna Louise Sagraves, 85, of Portsmouth, passed away Tuesday, May 7, 2019 at Rosemount Pavilion. She was born January 7, 1934 in Portsmouth, a daughter of the late Daniel Edward and Mae Luella Elliott Buckley.

Anna was a homemaker and had worked for the Board of Elections and Ohio State Employment Office. A Portsmouth High School graduate, she was a member of Cornerstone United Methodist Church and a former DeMolay Mother.

Funeral services will be held at 11 A.M. Wednesday at the Ralph F. Scott Funeral Home in Portsmouth with Rev. Greg Carter officiating and interment in Memorial Burial Park.

The family will receive friends at the funeral home Wednesday from 5 to 7 P.M. and one hour prior to services Thursday. 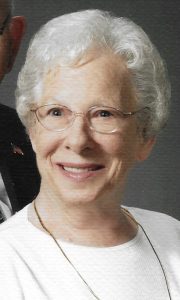