Sidney Theodore “Sid” Dillow, 83 of West Portsmouth, died Monday April 22, 2019 at his home. He was born August 16, 1935 in Scioto County to the late Walter and Margaret Campbell Dillow. He was retired after 36 years at Empire Detroit Steel, he also worked at the New Boston Coke Plant, a member of the Steelworkers Local 2116, a 25 year member of the Gideons, and a member of the Pond Run Baptist Church. Sid was Saved and Baptized in 1961.

Along with his parents he is preceded in death by a son Martin Kent “Marty” Dillow, a brother Clyde Dillow, and 5 sisters.

Funeral Services will be 1:00 PM Friday April 26, 2019 at the Pond Run Baptist Church with Jimmy McCullough officiating and interment in McKendree Cemetery. Friends may call at the Roger W Davis Funeral Home in West Portsmouth on Thursday from 4 to 8:00PM and one hour prior to the service at the church on Friday. The family requests that any donations be made to Heartland Hospice of Portsmouth or the Gideons in Sid’s name. Condolences may be sent to www.rogerwdavisfuneralhome.com 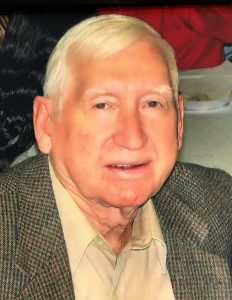