Pauline Dawson Perkins, 89, of Waverly, Ohio passed away April 19, 2019 at Signature Health Care in Chillicothe, Ohio.  She was born January 5, 1930 in Piketon, Ohio to the late Chris Byron Dawson and Opal Florence Rheme Dawson.  On December 3, 2018 she was preceded in death by her loving husband of 63 years, James Calvin Perkins Jr. who she wed on April 9, 1955.  Surviving are two sons, Ray Perkins and wife Sharon, and Stephen Perkins both of Waverly; a daughter, Tina Perkins of Waverly; two granddaughters, Brittany Lynn Perkins and Kristin Marie Perkins; and a sister, Wilma McElwain.  In addition to her parents and husband she was preceded in death by a brother, Paul Dawson; a sister-in-law, Joan Dawson; and a nephew, Patrick Dawson.

Pauline and her husband were the former owners of High Street Laundry in Waverly.

Funeral services will be held at 1:00 pm Wednesday, April 24, 2019 at the Botkin Hornback Funeral Home in Waverly with Rodney Bapst officiating.  Burial will follow in Evergreen Cemetery on Denver Road in Waverly. The family will receive friends from 11am until the time of the service at the funeral home. 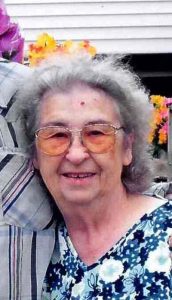