Age 82, of McDermott, passed away Thursday, April 18, 2019 at SOMC Hospice in Portsmouth.  He was born June 28, 1936 in Portsmouth to Roy James Wolfe, Jr. and Doris Belle (Hurley) Wolfe.  Adel attended McDermott High School and honorably served his country as a member of the National Guard.  He worked in his early years at Taylor Stone Company in McDermott and retired from USEC in Piketon.  He could fix anything and was fond of fishing and gardening, especially raising vegetables.

In lieu of flowers, the family requests that donations be made to SOMC Hospice in Portsmouth who took such great care of Adel.

Funeral services will be 1:00 p.m. Tuesday, April 23, 2019 at WOLFE-NELSON FUNERAL HOME in Sciotoville with Pastor John Richards officiating.  Interment will follow at Scioto Burial Park.  Visitation will take place one hour prior to the funeral at the funeral home.  Fond memories of Adel and expressions of condolence may be shared at www.WolfeNelsonFuneralHome.com. 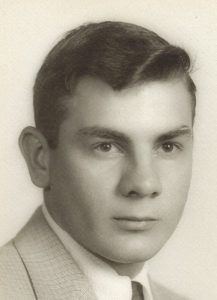