Jack E. Beebe, 97, of Lucasville, went to be with the Lord, Sunday, April 7, 2019 at Southern Ohio Medical Center.
He was born September 16, 1921, in Centralia, Illinois to Everett and Dolores Fink Beebe.
Jack was an honorable gentleman in the US Navy during World War II, 1942-1945, as ship fitter 1st class. Again, during the Korean Conflict in 1950-1951, he served in the Navy, this time as a metal smith, 1st class. He met his bride of 50 years, Helen, at a railroad stop in Portsmouth, Ohio during his service.
They went on to have three beautiful children and all were members of the Emmanuel United Methodist Church in Lucasville, Ohio.
Jack was a master craftsman with a natural gift in woodworking and mechanics. He took great pride in spending leisure time in his woodworking shop and restoring antique motorcycles.
He was a former pipefitter and sheet metal mechanic for the Illinois Central Railroad before relocating to Ohio to be with Helen. After 32 years of employment, he retired from the Goodyear Atomic Plant in 1985 where he was a utility maintenance foreman.
This honest man was a formidable example of a husband, provider, father, grandfather and human being.
“To be absent from the body is to be present with the Lord.” He is with all those who have passed before him, dancing — preceded in death by his first wife, Helen of 50 years, and his second wife Dolores of 20 years.
Jack is survived by his three children; Stephen Beebe (Kim), Sherri Hopkins (Jeff), and Gayle Copley (Mike). His five grandchildren: Jeremy Beebe, Angela Althoff (Rick), Andrea Beebe (Henry Liu), Nicholas Williams (Mollie), and Emily Williams; his four great-grandchildren; Leif Beebe, Payton Williams, Duke Althoff, and Sakura Beebe Liu.
Graveside military services will be held at noon, Thursday, April 11, 2019 in Memorial Burial Park in Wheelersburg. The family will receive family and friends from 5 to 8 p.m. on Wednesday, April 10 at the McKinley Funeral Home in Lucasville.
The family would like to express our thanks to the excellent help and care given to Jack by Heartland of Portsmouth. 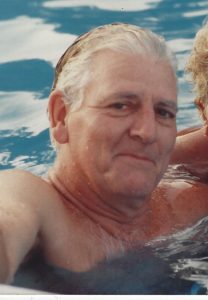