Gerald Nelson, fought for as long as he could to stay with his family, until the Lord called him home, April 7, 2019 at Riverside Hospital in Columbus, Ohio.

Gerald was born on March 16, 1932 to the late, William Loar and Sarah Elizabeth Nelson of Jackson, Ohio.

Along with his parents he was preceded in death by a daughter, Marsha Diane Nelson.

Gerald, was a hard worker all of his life, he retired after 25 years from the Portsmouth Gaseous Diffusion Plant. He was an avid race car fan and OSU buckeye fan. Gerald, was the most giving man, with a huge heart and always the jokester. He was a very loving husband, devoted father and grand-father as well as a friend.

In lieu of flowers, donations can be made to the Antioch Church in care of Lori Michael, Treasurer, 1282 Dever Road, Jackson, Ohio.

Arrangements are under the direction of the Mayhew-Brown Funeral Home.

Condolences may be sent to: www.mayhew-brownfuneralhome.com. 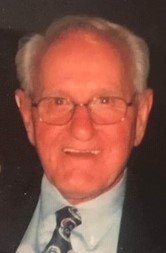