The Lord called Helen home on Tuesday, February 26, 2019.  She was born in New Boston, Ohio on Friday, August 5, 1927 to Claude and Cora Walker Craig.  Helen was raised in North Moreland.

Helen loved family above all bound to this earth.  Other than the love and laughter of children she enjoyed dancing, bowling, ceramic crafts, crocheting, and embroidery, always willing to teach another the artistry.  Many children walked through her home always leaving with the feel of having a home.  She was a lady that touched every person she met, giving them a sense of love and knowledge.

Funeral services will be held 1:00 p.m. Saturday, March 2, 2019 at D.W. SWICK-NELSON FUNERAL HOME in New Boston with Don Stiltner officiating.  Interment will follow at Batterson Cemetery.  Friends may call Friday from 5 – 7 p.m. at the funeral home and one hour prior to the services on Saturday.  Fond remembrances and expressions of condolence may be shared at www.DWSwickNelsonFuneralHome.com. 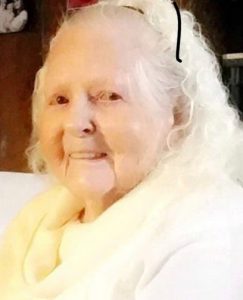