Vaughn Hinze, 99 of West Portsmouth died Monday, February 25, 2019 at Hill View Health Care Center.  He was born December 2, 1919 in West Portsmouth to the late Homer and Pauline Hill Hinze.  Along with his parents, he was preceded in death by 2 brothers; Adrian and Kenneth Hinze and a son-in-law, Buster Stall.

Vaughn retired as an Electrical Engineer from Ohio Power after serving 45 years.  He was an 80 year member of Rehoboth Mission Church, where he was Treasurer of the church for many years.  He was a United States Army WWII Veteran, part of the 5th Auxiliary Surgical Group that was part of the follow up invasion into Utah Beach.  He was a 64 year Mason and two time Past Master in 1985 and 1987, a charter member of the Nauvoo Masonic Lodge #769, a member of the Eastern Star #424, York Rite since 1963, and Scottish Rite of Cincinnati.  His favorite past time was attending and working the races at Portsmouth Raceway Park.

Funeral service will be 1:00 PM Saturday, March 2, 2019 at the Roger W. Davis Funeral Home in West Portsmouth with Dave Lute and Ralph Clay officiating.  Interment will be in Scioto Burial Park with Military graveside rites performed by James Dickey Post 23 American Legion.  Friends may call at the funeral home from 5 to 7:00 PM on Friday and one hour prior to the service on Saturday. A Masonic Service will be held at 7:00 PM on Friday by the Nauvoo Masonic Lodge #769.  The family request that donations be made to SOMC Hospice or the Charity of your choice in Vaughn’s memory.  Condolences may be sent to www.rogerwdavisfuneralhome.com. 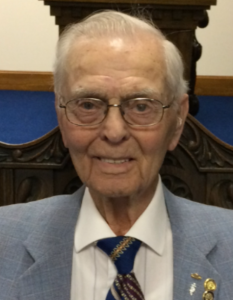