Mary was a 1953 graduate of Piketon High School, a member of Pleasant Hill Community Church where she taught the primary Sunday school class for many years, and she also attended Harvest Barn Church with her family.  She was a homemaker and provided child care for a lot of children through the years and was fondly called “Mamaw Mary”.  Mary enjoyed cooking and teaching her grandchildren how to cook.

Funeral services will be 1:00 p.m. Wednesday, February 20, 2019 at Botkin Hornback Funeral Home in Waverly with Michael Heath Blankenship and Jeff Rhoads officiating.  Burial will follow in Smith Hill Cemetery, Piketon, Ohio.  Family will receive friends on Wednesday from 11:00 a.m. until the time of service. 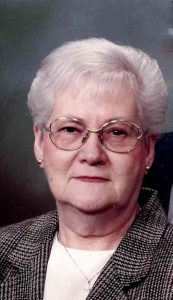