She was preceded in death by her first husband Ralph E. Lewis on February 12, 1988 who was the father of Lynn, June and Gail, and her second husband, Paul Thomas Winn on January 3, 2001. She was also preceded in death by brothers and sisters-in-law: Chalmer and Edna Rudd, Paul and Ann Rudd, brothers, Ollie Rudd and Harold Rudd, a sister, Juanita and Donald Jones,  a son-in-law, Fred Miller,  and brothers-in-law: Paul Hayslip, and Clifton Wamsley.

Mrs. Winn was a member of the Pleasant Hill Community Church and retired from Copeland in West Union.

Funeral services will be 1:00 P.M. Tuesday at the Botkin Hornback Funeral Home in Otway with Pastor Gary Brown officiating. Burial will follow in the Locust Grove Cemetery. The family will receive friends on Monday from 6:00-8:00 P.M. and Tuesday from 12:00 noon- 1:00 P.M. 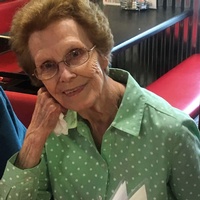