Ottie Wayne Reno, Sr.  passed away on February 11, 2019 at Piketon Nursing Center at the age of 89.  He was born April 7, 1929 in Camp Creek Township, Pike County, Ohio and lived there all of his life.  He was predeceased by both parents, Eli Enos Reno and Arbannah Belle Jones Reno and four brothers and sisters; Arizona Wade Reno, Monica Ruth Reno Kirk, Marjorie Ann Reno Roberts and Gene Franklin Reno.

Ottie attended Camp Elementary School, grades one through eight, 1935-1943 and Piketon High School grades nine through twelve 1943-1947, graduating in 1947 as Valedictorian of his class.  He next earned a Pre-law Degree in Business Administration at Franklin University in 1949 and then a Bachelor of Law Degree at Franklin University in 1953.  He was admitted to the Ohio Bar Association in 1953 at the age of 23.  In 1966 he received a Doctor of Jurisprudence Degree from Capital University and in 1973 earned a Certificate in Juvenile Justice attending the University of Nevada at Reno.  He attended three semesters at Ohio State University.  In 1953 Ottie started practicing law in Pike County.

As an active part of the political scene for his entire adult life, he served four terms as Pike County Recorder between the years 1957-1973, six years as Common Pleas Judge Probate and Juvenile Divisions 1973-1979.  He served as a Hubert Humphrey delegate to the 1972 Democratic National Convention in Miami and again in 1996 as a Bill Clinton delegate in Chicago.  Other positions held included Assistant Prosecuting Attorney, Democratic Central Committeeman for Camp Creek Township 1956-1972 and 1985-1990, and Secretary of the Pike County Democratic Executive Committee 1971-1972 and 1988-1990; Member Ohio Democratic Central Committee 1969-1970; Democratic nominee in 1966 for Congress from Ohio’s Sixth District in 1992.  Democratic nominee for Ohio House of Representatives 88th District in 1992.  President of Scioto Valley Local School District Board of Education 1962-1965.  Awarded six Outstanding Judicial Service awards from the Ohio Youth Commission in 1974.  He made dozens of speeches on many topics which included college commencement addresses for both his daughters and a televised seconding nomination of a presidential candidate at the 1972 national convention in Miami.

He served three years in the U.S. Army during the Korean Conflict as a member of the 166th Regimental Combat Team, Ohio National Guard and received an Honorable Discharge.  Ottie was also a member of the American Legion Merritt Post 142, Waverly,Ohio.

In his favorite hobby of horseshoe pitching he won eighteen state championships in Alabama and two class championships in World Tournament play.  Set a Guinness World Record by participating in 59 World Tournaments.  He is a member of four horseshoe pitching Halls of Fame:  National Horseshoe Pitchers Association 1978; Ohio HPA in 1978; Alabama HPA in 1977; and Ohio Senior Olympics in 2008.  In 1964 he received the Arch Stokes Memorial Award considered by the NHPA as its most prestigious award.  Ottie designed and marketed the RENO pitching shoe, used by several state and world champions in NHPA sanctioned competition.

He sang for a time in a gospel quartet and was a member of the Church of Christ in Christian Union.  Those who knew him knew that he loved life and loved his family. 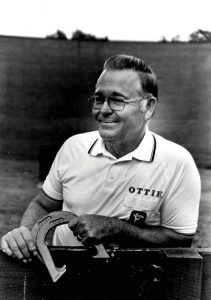