Verna Mae Grashel McGlone, 82, of Portsmouth, went to be with the Lord Sunday, February 3, 2019 at the SOMC Hospice Center. She was born in Portsmouth June 1, 1936, to the late Floyd and Goldie (Yelley) Grashel.

Verna graduated from Portsmouth East High School in the Class of 1954. She retired June 1, 2001, from Community Action Organization where she had held several different positions. Verna had also worked for Prudential Insurance and the former Kresge’s and William’s Manufacturing Company as Supervisor of Purchasing until their closing in 1976.  She was of the Baptist Faith and had attended Union Freewill Baptist Church in Wheelersburg for many years.

In addition to her parents and husband, she was preceded in death by a son, Rickie Ray McGlone; brother, Robert “Bob” Grashel; sister, Ruth Lewis; nephew, Ronald Lewis; and brother-in-law, Ken Holmes.

Funeral services will be held at 11 a.m. Wednesday at the Ralph F. Scott Funeral Home in Portsmouth with Rev. Evan D. Fisher officiating and interment following in South Webster Cemetery.

The family will receive friends at the funeral home one hour prior to services. 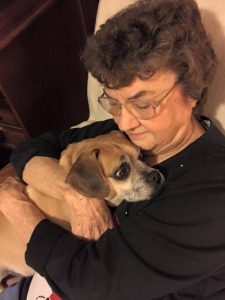