Dalius Cloteen (Wooten) Creekbaum, 99, a former Minford resident, passed away peacefully Thursday, January 3, 2019 at her home in West Chester, Ohio, where she had lived for 15 years. Born September 24, 1919 in Lewis County, Kentucky to Henry Forest and Mary Alma Wooten, she graduated from Portsmouth High School in 1939 and the Mercy Hospital School of Nursing in Portsmouth, Ohio in 1942. Of the Christian faith, Cloteen had worked in the nursing field in several nursing jobs. Her last job had been as an instructor in the nurse’s aides program at Vo-Tec. Active in civic, church and school activities, she a charter member of the Minford Garden Club.
Preceding her in death in 2001, was her husband of 56 years, Harold Creekbaum. In addition to her husband and parents, she was preceded in death by eight brothers, Curtis, Edgar, Wayne, David (Red), Clifford, Mylo, Paul and Elmer (Doc). Surviving are daughters, Linda Fraley (Gerald) of Minford and Maryellen Smith of West Chester; grandson David Lovern (Belinda) and four great grandchildren, Coleman, Alyssa, Emma and Sam all of Valdosta, Georgia.
Funeral service will be conducted 11:00 a.m. Monday, January 7, 2019 at Erwin-Dodson-Allen Funeral Home in Minford with Jason Coriell and Kenny Creekbaum officiating. Burial will be in Memorial Burial Park in Wheelersburg. Friends may call at the funeral home from 5:00 to 7:00 p.m. Sunday, and one hour prior to the service on Monday. On line condolences may be made to www.edafh.com. The family requests memorials be made to: Hospice of Cincinnati, P.O. Box 633597, Cincinnati, Ohio 45263-3597. 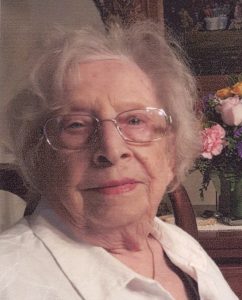