It is with great sadness that the family of Kenneth Richard Hamilton announces his passing after a battle with a brief illness. Kenny passed away Saturday, December 8, 2018, at the age of 50 years at SOMC Hospice. He was born November 6, 1968 in Portsmouth to the late Watt Barrett and Mary Neal Hamilton. In addition to his parents he was preceded in death by a brother, John Hamilton.

He spent his last years at Bridgeport Nursing Home in Portsmouth and his last days under the care of Hospice.

He graduated from Happy Hearts School and went to work at Vern Riffe Workshop.

Despite the many challenges and hurdles he faced, Kenny lived with a passion and love for others. He loved people, and people loved him. Kenny had an unmatched sense of humor and a smile that was contagious. Without even knowing, Kenny touched so many lives and was loved by so many.

Funeral services will be 1:00 PM Tuesday, December 11, 2018 at the Roger W. Davis Funeral Home in West Portsmouth with Sam Salyers officiating and interment in Mustard Cemetery. Friends may call at the funeral home on Tuesday starting at 11:00 AM. Condolences may be sent to www.rogerwdavisfuneralhome.com. 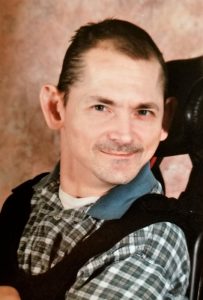