Born June 29, 1925 in Scioto County, a son of the late Walter W. and Effie (Nance) King, he was a retired employee of Dayton Walther Corporation in Portsmouth. He attended Charity Free Will Baptist Church in Clarktown and was a graduate of Stockdale Local School in the class of 1948. He also served as a volunteer firefighter, a trustee of Madison Township, and was instrumental in the establishment of the Madison Township Senior Center.

George was a D-Day veteran. He was in the Coast Guard and the Navy during World War Il, participated in the Normandy Invasion, and was a member of James Irwin Post No. 622 American Legion as well as the Lion’s Club in Minford.

He is survived by many nieces and nephews.

Funeral services will be conducted 2:00 p.m. Sunday, December 2, 2018 at Erwin- Dodson-Allen Funeral Home in Minford, with Pastor Gary Dheel officiating. Burial will be in Sunset Memorial Gardens in Franklin Furnace. Friends may call at the funeral home from 5 to 7 p.m. Saturday, and one hour prior to the service on Sunday. Military graveside rites will be conducted by the James Irwin Post No. 622 and William Baker Post No. 363. Online condolences may be made to www.eadfh.com 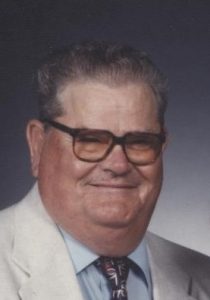