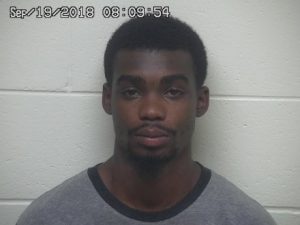 Scioto County Sheriff Marty V. Donini and Portsmouth Police Chief Robert Ware announce that a Dayton, Ohio man has been arrested for distributing suspected heroin in Portsmouth, Ohio.
On September 18, 2018 at approximately 4:50p.m.,the Southern Ohio Drug Task Force, assisted by officers with the Portsmouth Police Department and a detective with the Scioto County Sheriff’s Office, stopped a vehicle in the 1900 block of Grant Street in Portsmouth. Due to evidence having been obtained during an active task force investigation, the driver of the vehicle, 24 year old James Chauncey Reed of Dayton, Ohio was arrested on a charge of Trafficking in suspected Heroin, a felony of the 5th degree, that occurred on September 17, 2018. Reed was found in possession of approximately $1,200 cash at the time of his arrest.
At approximately 4:54p.m., task force officers executed a search warrant at the suspected motel room of Reed’s in the 1900 block of Kendall Avenue in Portsmouth. Officers seized another $2,760 cash, approximately twelve grams of suspected heroin, digital scales, and additional evidence of drug trafficking.
Reed was additionally charged with another count of Trafficking in suspected Heroin, a felony of the 2nd degree.
Reed was placed in the Scioto County Jail and was to be arraigned in Portsmouth Municipal Court on Wednesday, September 19, 2018 at 9a.m.
The case is under further investigation and will be eventually forwarded to the Scioto County Prosecutor’s Office to be presented to a Scioto County Grand Jury for the consideration of additional felony drug charges.

Sheriff Donini and Chief Ware request anyone wishing to leave drug information for the Southern Ohio Drug Task Force, should phone the Task Force tip line at
(740) 354-5656 or email drugs@sciotocountysheriff.com. All information will be kept confidential and anonymous.